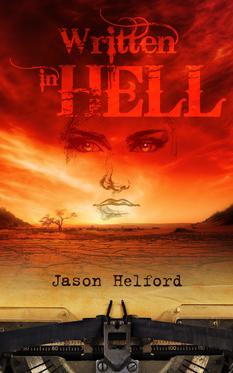 The entire narrative is irreverent fun, with mild overtones Kurt Vonnegut and Tom Robbins...The author does an admirable job of designing and describing his version of Hell and the fantastic rules that shape it...An entertaining, inventive and occasionally over-the-top fantasy novel.

Written in Hell is one of those occasional books I like more the more I think about it...The comedy is at one both slapstick--strong physical comedy focused on Nate's lack of control over his body--and much more subtle...If the role of art is to change the way you see the world,...well, I'm never going to picture the Devil the same way again.

The plot is unique, original and different with a touch of Dante's Inferno , yet this version of Hell is masterfully created with a fresh newness about it...Overall, a very good and one that I will not soon forget.

I started it right before I went to bed, thinking, "I'll read a few chapters and then get some sleep." I couldn't put it down...Overall, I enjoyed reading Written in Hell and I definitely recommend it.

- Reviews from a Book-Obsessed Human

Written in Hell is a brilliant concept. It plunges you into a different world...One is compelled to delve into the characters...I recommend this book as it is a five-star read.

It has an intense and thrilling plot, with brilliant characters and seamlessly plunges you into an amazingly vivid world. Definitely a must read for fantasy lovers!